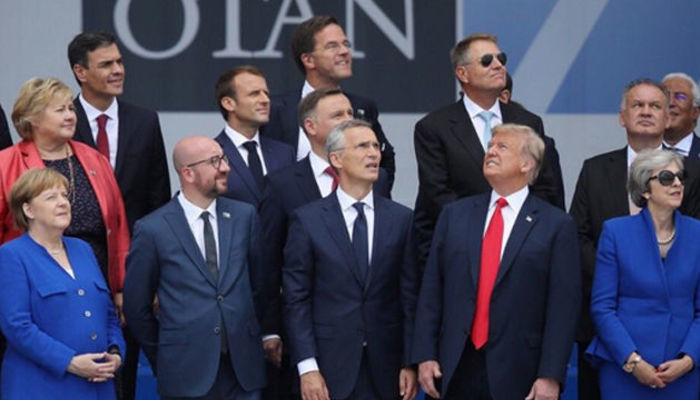 Trump wants the NATO Allies to Invest more than Agreed 2 Percent. US President Donald Trump wants NATO allies to invest even more in defence that has been agreed. Now 2 percent of NATO allies’ national income has to go to defence spending, but Trump wants that percentage to go up to 4 percent.

The allies agreed in Wales in 2014 that they should work towards the two-percent norm in ten years. Since the agreements were made, the defence budgets have increased annually, but not all partners yet reach the NATO standard. Only eight countries are on that 2 percent this year.

That is not enough for Trump, and the norm should be 4 percent for him. The United States itself is 3.5 percent. In the final official declaration of the first day of the summit, however, nothing can be found about a new standard. According to the White House, it is not a formal request.

In the statement, all 29 NATO members expressed their full commitment to the agreements of Wales.

More money
Indeed, before the start of the NATO summit, it was clear that President Trump wants more from the allies. He thinks that the US will pay for the costs of the military alliance.

Prime Minister Rutte agrees with Trump that more money is needed. Under his leadership, the Dutch armed forces were instead massively cut back. In the coalition agreement, it has agreed that more money has to add, but it is not enough. With 1.35 percent, the Netherlands is below the NATO standard and also below the NATO average of 1.47 percent. With the intended investments, the Netherlands will not meet the NATO standard in 2024.

Rutte does not, however, seem to intend to use this cabinet period. “We have to look again at expenditure in 2020”, says the prime minister.

Germany
Trump opened the summit by expressing severe blame in the direction of Germany. According to the American president, Germany would be “totally controlled” by Russia. “The country is a prisoner of Russia,” Trump said. He mentioned to the construction of the controversial gas pipeline Nord Stream 2, which has to transport Russian gas to Germany.

NATO indispensable
Although the tone of Trump has been active in the weeks leading up to the top, after the first day, the Americans are still committed to the military alliance.

NATO chief Jens Stoltenberg remarked earlier in the day that it is “no law of nature” that NATO will always exist. If it is up to the US Senate, NATO will continue to live. In Washington, 97 senators voted for a non-binding motion in which support has given to the alliance. Two senators voted against.

Paul Ryan, the Republican chairman of the US House of Representatives, emphasised the importance of NATO, also for the US. “NATO is indispensable, and the alliance is just as important today as at any other point in the past,” Ryan said.