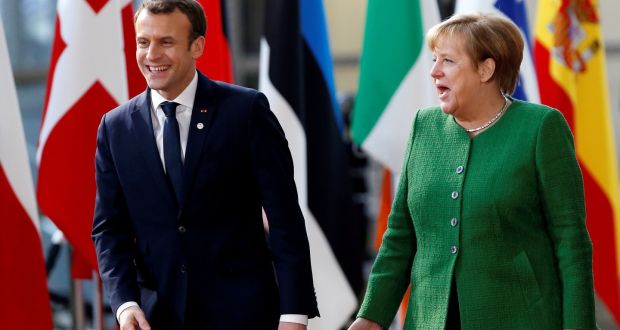 German Chancellor Angela Merkel and French President Emmanuel Macron have put forward some common positions at a press conference. They want to equip the eurozone with a separate budget by 2021 and want to work together to stop migration to Europe.

The leaders met at a bilateral summit in Slot Meseberg, north of Berlin. Macron has been arguing for a separate budget for the eurozone for some time, but at the insistence of Merkel, the instrument will primarily be intended to boost investments in the nineteen euro countries and to coordinate their economic policies more closely.

Since the summer of 2017, Macron has been calling for a eurozone budget of ‘multiple percentages’ of European GDP, accounting for hundreds of billions of euros. Merkel does not see such a large budget because she fears a transfer union, in which the least competitive euro countries would no longer have incentives to pursue a conservative policy and the German taxpayer would suffer.

But now she still agrees with a separate budget that should boost the level of investment in the eurozone. How that budget should be financed and how big it should be, Merkel and Macron did not say during their joint press conference. They leave these details to their competent finance ministers. Macron also pointed out that the remaining seventeen member states of the eurozone still have to agree with the proposal.

Merkel and Macron also want the emergency fund ESM (European Stability Mechanism) to be extended to protect the euro against future financial shocks better. This is the start of the second part of the life of our common currency, “Macron said.

Macron and Merkel remain behind a European approach to the problem of migration. They want more solidarity between the various EU countries, and together they will reduce the flow of refugees. This will be done by spreading refugees across different countries, but also through investments in countries of origin. Frontex, the European Border Guard, is being strengthened.