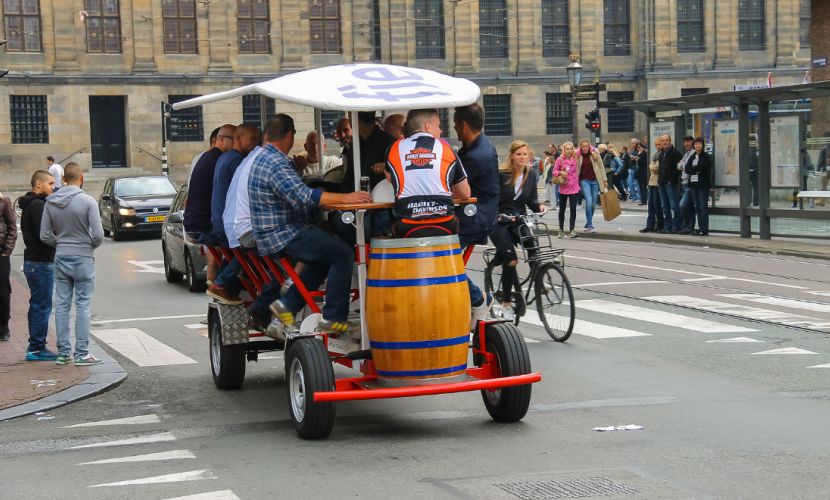 Party bikes also known as beer bikes are the passenger powered wheeled vehicle. It has a capacity up to 20 people and is driven by the passenger who paddles all the way long to power it along with the driver who controls steering and brakes. They are popular in the United States, Australia and Amsterdam in the activities like beer biking and pub on wheels. They are also used by the tourists who ride them to take a trip around the city.

It was 1957 when the world witnessed the first beer bike in Amsterdam pub party. It was used as a creative marketing technique for the promotion of a bar in the pub crawl. Amsterdam beer bike then became popular. Unlike pub crawl in which people drink while they walk from one drinking spot to another, beer bike is an activity in which they ride the bikes while drinking. The beer supply is available on the bike.

The bike is constructed in such a way that beer is available to the drinkers in an excess amount. The shelter is also designed over their heads so that the bad weather and wind could not spoil their fun. People sit together in two rows facing each other. It is similar to the way people sit on a rectangular dining table. At one end is the attached drum of beer while at another sits the driver who is probably not drunk and controls the steering and brakes.

Amsterdam beer bike is very popular among the visitors who never miss it whenever they get a chance to visit Amsterdam. If you are planning to visit Amsterdam in this summer, do not forget to try this adventurous ride in cost as low as 35euros in which you will get a beer bike ride of two hours with thirty litres of beer.